You are contacting Rob Lake Illusionist - seen on AGT 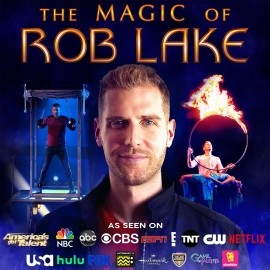 "World's Greatest Illusionist" (NBC), Rob Lake amazed Millions around the world as a finalist on AGT & international network television, and as a headliner grossing Millions of dollars in arenas, theatres, and casinos worldwide including the Atlantis Resort (Bahamas)
Request a Quote
Share this Page:
Profile Views: 1486
✖