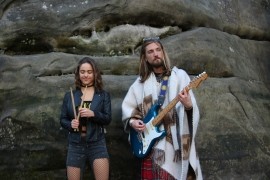 (no reviews)5.0
Country: United Kingdom
Based In: Kent, South East
Performs: Worldwide
From: £500

Heyzeus is an exciting & dynamic 2 piece upbeat party/rock acoustic band from the UK. Expect to hear songs from the likes of Nirvana & Oasis, and awesome edgy rock versions of artists such as Amy Winehouse or Miley Cyrus. Heyzeus have performed all across the world.
: 0744918XXXX Click here to reveal
full number