You are contacting Sassy Stryker 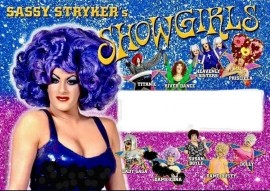 Sassy stryker has been performing all over the world for many years with over 3500 shows. Edinburgh festival, Bangkok, Spain, New York, Australia, Denmark & Ireland. A complete comedy Drag show with sound & lighting including a mixture of live stand up comedy.
Request a Quote
Share this Page:
Profile Views: 969
✖