You are contacting The George Michael Legacy Featuring Wayne Dilks 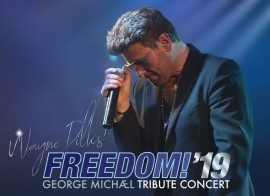