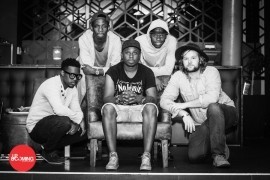 When contacting this member, please state that you are viewing their Entertainers Worldwide profile.
Request a Quote
Share this Page:
Profile Views: 114
Report this profile

We pride ourselves in delivering memorable and powerful performances everywhere we perform. We do Afro Rock fused with Mbaqanga an interpretation of Africa and The Rainbow nation.Electricity and fire is what we bring to the stage so be careful.

Technical image is band formed by Young men who believe in addressing the ill issues and struggles of the world through songs,formed in 2012 the band has performed at over 30 venues and festivals across South Africa and Africa.
The band does AfroRock and a fusion of "Mbaqanga"a constant African Rim shot.
We are currently working on our debut album which is set to drop this year May,and is already Being anticipated by our fans and radio compilers.we pride ourselves in delivering a powerful and memorable performance everything we grace the stage anywhere in the world.
We are one,Changing ... the world Through Song.

Recent gigs include playing the Standard Bank Joy of Jazz,Somafco Trust festival,Jazz on the lake and have won the competition to play the Capetown international jazz festival,we released a single that is well received by the Radio stations Both Community and international including Major ones in Tanzania,In 2015 we had a tour in Tanzania as part of learning other cultures and their Music,Which Started in dar es salaam,morrogoro than Zanzibar.