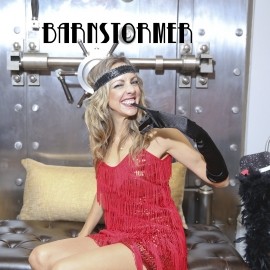 LIVE - A wow factor all around. Includes 1920's costumes, the switching of instruments, variety of feels, familiar songs, projected images if there's a backdrop/screen for that, a PA - if necessary. (We use plexi-glass, and sneeze screen pull ups to remove Covid concerns). We have a fabulous 45 -50 minute roaring 20's set.
VIRTUAL EVENT - includes multi camera switcher, camera operator, shout outs, branding, professional lighting, editing (if / when necessary). (Currently with Covid guidelines, also plexi-glass and clear sneeze screens are used.) We have a fabulous 22 minute roaring 20's s ... et.
SOLO/DUO: Options can be discussed. 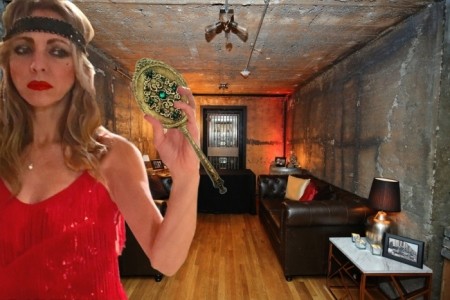 Barnstormer - roaring 20's band - Other Tribute Act - Vancouver, British Columbia Event Location: Vancouver, BC, Canada Event Type: Night club 8th February 2020
My name is Kevin Schallie, I am the CEO of Live Acts Canada and partner at The Live Agency. We produce over 400 hundred shows each year in the Vancouver area. Barnstormer performed at the Blarney Stone in late January 2020. And the band leader Melanie Dekker has performed for Live Acts Canada on several occasions as well. It was exciting (a tight band with a good repertoire), fun (costumes where fabulous) and different (1920’s & sassy). The sound & quality of music was top notch, with the clarinet player even astounding the bartenders. They had a resounding impact on me. I requested them to perform at other events we were planning in Vancouver, this upcoming summer. When live music and programming there of can continue and prevail, we will certainly invite them to do more shows at our venues & special events. I believe with help from Factor, it will make a big impact on the bands career. Kind Regards, Kevin Schallie CEO – Live Acts Canada Partner – The Live Agency
Reviewed by: Kevin Schallie-Live Acts Canada

Band Members have over 100 years of experience collectively. Who are they?
MELA - Honey, short for Melanie.
LEAD VOCALIST, BANJO, UKULELE
Melanie Dekker, has a voice like chocolate & a vivacious spirit. A singer-songwriter & touring recording artist. Awards, hit singles & fans world-wide. She has a series of good-vibe youtube videos and tours over 100 concerts a year. Mela would say, “Do you think about me, when you stare at the rain?”
BABE RUTH - CLARINET. An iconic American baseball home-run hitter.
Tom Keenlyside is a woodwind pro! He has performed and recorded with a variety of ... international artists including Natalie Cole, Aerosmith, Mel Torme, Van Halen, Diana Krall, Motley Crüe, and the Vancouver Symphony Orchestra. He’s earned a star on the BC Entertainment Hall Of Fame Walk. As Babe would say, “Every strike brings me closer to the next home run.”
AL CAPONE - DRUMS. Gangster & business man during the prohibition, who ended up in Alcatraz.
Allan Rodger, a studio engineer, a record producer and fiery multi-instrumentalist. He focuses on keeping it real. While being simultaneously inspired by his Mother’s lovely voice & Stevie Wonder records, he built his first drum-kit at 9 years old & already had his first gigs as a pre-teen. Capone would say, “Once in the racket you're always in it.”
ALBERT EINSTEIN - GUITARS. German theoretical physicist who developed the theory of relativity.
Eric Reed, a multi-instrumentalist & studio engineer/producer whose talents have accumulated a Juno nomination, a Canadian Folk Music award, & a Gaylord Woods traditional roots/country award. Albeit he is mostly influenced by Jimi Hendrix & Ry Cooder :). Eric’s always on the move & often in the mountains. As Einstein would say, “Life is like riding a bicycle. To keep your balance you must keep moving.”
SALVADOR DALI - UPRIGHT BASS. Spanish surrealist artist & eccentric man, best known for bizarre images.
Jeremy Holmes has an impressive jazz degree and a young family. He spends his days as a hired gun in recording studios and many of his evenings on a stage. He met Mela while recording Secret Spot in Vancouver. His precision, drive & likability are no secret. His list of projects is a script too long for this occasion :). As Dali would say, “Intelligence without ambition is a bird without wings.”

MELANIE DEKKER tours extensively with her own 7 albums in tow. She had designed this 1920's project with a band leader in mind. His name was David Sinclair, renown guitarist and good friend, but when he passed away unexpectedly a few years ago, she needed to heal while inspiration to get on it, took a back seat. After going to a 1920s themed party in 2019, the burning desire to get it going came back! A she stepped up as band leader. Within 3 months Melanie gathered her favourite suitable and enthusiastic pro players, and designed a crafty feel-good set list of 1920's material. Alas, Covid-19 ... marooned the band in March 2020 and shows were cancelled. We kept the iron hot by making an album, most of it live off the floor from the shows and the rest via flown in tracks from the isolated friend and musicians.
LEAD VOCALIST, BANJO, UKULELE, GUITAR.
Melanie Dekker, has a voice like chocolate & a vivacious spirit. A singer-songwriter & touring recording artist. Hit singles & fans world-wide. Though she often plays solo concerts with 7 self-penned albums in tow, this Barnstormer project is a 'cover' project that exaggerates her sassy nature, and range, while bringing a fabulous band together.

My team at WHOOPEE brings your event forward with enthusiastic excellence. It is sonically brilliant & visually dynamic, while incorporating your message. Or if you like, it can just be our message. Live roaring 20's music. It is live & interactive and multi-camera recording.

We work together to achieve your goals and set up an online streaming platform which you can customize - and it integrates the following:

And all of this while the CONCERT & MUSIC is performed JUST FOR YOU! We are not restricted by Covid Regulations as we have plexi-glass and sneeze screens and 2.5 meters between each of us. Performance time recommended: 22 minutes. (Best for attention span and wow factor!)