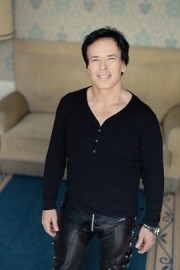 Look-a-like, sound-a-like, Johnny Zatylny has been captivating audiences by carrying on the musical tradition of Freddie Mercury since 2000. His amazing likeness with the original, matches his perfect performance of “Queen”
: +491766478XXXX Click here to reveal
full number

When contacting this member, please state that you are viewing their Entertainers Worldwide profile.
Request a Quote
Share this Page:
Profile Views: 781
Report this profile

Look-a-like, sound-a-like, Johnny Zatylny has been captivating audiences by carrying on the musical tradition of Freddie Mercury since 2000.

His amazing likeness with the original, matches his perfect performance of “Queen” songs both through his voice and his unmistakable stage presence.

This fabulous 6-piece Queen tribute is an exciting, high energy show that will get people out of their seats. “Queen Flash” is a grand, theatrical representation of the real Queen concerts, complete with vocal quality unmatched by any other tribute out there. It captures the essence of a ban ... d that transformed the music industry and set lofty standards for those who followed. “Queen Flash” will set the stage for a flash back to one of the world’s finest group of rock musicians!

Johnny Zatylny admits he’s hardly a household name in his native Greenfield Park – yet. But friends and family and fellow Parkers might be surprised to learn that Zatylny is a superstar in Germany and much of northern Europe. And he’s almost god-like in Gubin, Poland.
He may move around by métro in Montreal, but it’s mostly limos when he’s on the other side of the pond.
Zatylny is considered to be among the world’s top three Freddie Mercury impressionists. He has performed over the last eight years throughout Europe and North America with his Queen tribute band, MerQury, and has ... played to packed stadiums from Berlin to Stockholm and, yes, Gubin. Montrealers can see and hear what all the fuss is about when Johnny comes marching home with Another One Bites the Dust, his homage to Freddie and Queen, at the Gesù on Saturday. For he will certainly rock you.
Freddie Mercury – né Farrokh Bulsara – has been an unlikely boon to Zatylny’s career. Though the British glam rocker died in 1991, his music resonates almost as much today as it did in his group’s heyday with the release of such chart-busters as Bohemian Rhapsody, Somebody to Love and We Are the Champions (once the anthem of the Habs).
Mercury was no run-of-the-mill rocker. With his four-octave range, he could do it all, from falsetto to baritone. His voice had an operatic quality and is not easily imitated. Zatylny is one of the few who can almost match him note for note. All the more surprising since, unlike Mercury, he has had no formal training. “Just 30 years of non-stop singing,” the affable Zatylny says over a beer downtown.
When he glues on the trademark Mercury moustache and dons the glittering garb and keeps his once-blond locks coloured jet black, Zatylny can almost pass for Freddie in the flesh as well as in voice. Curiously, Zatylny was not much of a Queen fan. He spent most of his early career here as the frontman for the Montreal rockers Simon Says, doing covers of the most popular acts of the day.
But when Simon Says disbanded in 1997, Zatylny found himself for the first time in years without a regular singing gig. He wound up sweeping floors in a factory.
Then a friend called from L.A. to inform him of an opening in a disco band there.
“I jumped at the opportunity, even though disco really wasn’t my thing,” says Zatylny, whose brother Wally is a former Hamilton Tiger Cat and member of the CFL Hall of Fame. “But then again, anything would beat sweeping floors.”
It was only after he arrived that he learned he would have to dress in drag for the gig. “I asked myself what I was doing. Then they had me singing the female parts to tunes like I Will Survive.”
And he had to question whether he would survive himself. “I looked on the bright side: It strengthened my voice.”
While in L.A., he spotted an ad seeking singers to audition for the TV show, Your Big Break. He showed up and did a Jon Bon Jovi cover, but sensed that the producer was not blown away. So, for reasons still unclear to him, he asked if he could sing Bohemian Rhapsody. He did, and the producer was blown away. This led to a spot on the show and, shortly thereafter, to the MerQury act in Europe, where he does almost 80 shows a year.
“I never realized just what kind of impact Queen had out there, but I now know why they were so popular. Really, almost every one of their songs were winners, and they appealed to practically everyone, regardless of generation,” he explains. “The funny thing is that I get these hard-core Queen fans come up to me and start asking me about Queen trivia and songs I never heard of. I haven’t got a clue what they’re talking about.”
Zatylny, like his brothers Wally and Stephen (who played for the Winnipeg Blue Bombers), was also an athlete growing up and briefly entertained the notion of making football a career. “Then after getting hit really hard, I decided football might not be for me,” he jokes. “Wally was like a kamikaze kick-returner. He had no fear. He also had no voice. At least I had that option.”
The singing has turned out to be a better long-term career option than getting smacked around the gridiron. “I have to admit, though, that I initially thought after a few years, I would get really burned out and never want to hear Queen again for the rest of my life. But I’ve been doing it now for eight years, and every show is like the first one I did, and the energy and enthusiasm are still there.”
Unlike many music imitators, Zatylny is under no illusion that he is Freddie Mercury reincarnated. “There was only one Freddie. All I can do is bring his spirit back to the stage. But I don’t try to be him. Nor do I try to dress exactly like him, either.”
Zatylny is all for the glitz, but he does draw the line at the leather short-shorts Freddie used to sport. “I’ve got to be me.”

Share this Page:
Click here to view all of our Queen Tribute Bands on Entertainers Worldwide
Browse all Entertainment Hire options!