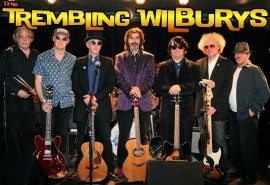 When contacting this member, please state that you are viewing their Entertainers Worldwide profile.
Request a Quote
Share this Page:
Profile Views: 127
Report this profile

If you’re looking for a tribute band with a difference, who play an incredible variety of songs by some of rock’s greatest heroes, then you’ve just struck gold. The Trembling Wilburys pay perfect homage to the Traveling Wilburys, the amazing supergroup formed in 1988 by George Harrison, Roy Orbison, Jeff Lynne, Bob Dylan and the late great Tom Petty with hits including “Handle With Care”, “End Of The Line” & “She’s My Baby” as well as their incredible solo catalogues, plus Beatles & ELO songs.
Formed 30 years ago in 1988, the original Wilburys never played live as the gr ... eat “Big O” passed away shortly after the release of their debut album Vol. 1, but luckily the "Tremblers" bring you their version of the “show that never was” with an incredibly uplifting two hours of fantastic music. In addition the band features two of the closest look-&-sound-alikes of any tribute act, with GLEN KNOWLER being the living double of George Harrison, while DAVE COLLISON perfectly captures Roy Orbison’s unique vocal range and look. Absolutely NO WIGS in this band, folks!
The band has a great following and has played many great gigs & functions in the UK & Europe over the past few years, including festivals, theatres, Beatles conventions, holiday resorts, sports clubs and many rock venues. The band was also officially endorsed & supported by the late Barbara Orbison, widow of Roy, while drummer & manager DAVID STARK has met all the Beatles along with Roy Orbison & Jeff Lynne and in 2006 was made a 'Companion of LIPA' by Sir Paul McCartney in Liverpool. 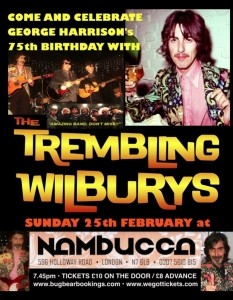