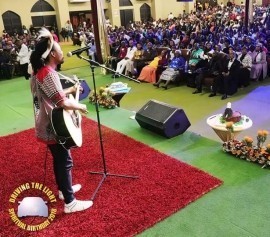 EARLY
MaffinMafatshe was born as Bongani Mnisi in an Informal Settlement found in Pretoria known as Mabopane,South Africa, He is the first of three children. He displayed his love for singing at an early age of 6. He first came to wider attention when he was appointed as the lead singer of a local Sunday school choir in Mabopane(Pretoria). His name (Bongani) means “appreciate”; as a child he was known by the nickname Bongrish Mafatshe. The Name Mafatshe Means "Worldwide".
MUSIC CAREER
In the early school days after changing from "Tsibogo Secondary School to Mabopane High School t ... hat is when Mafatshe was exposed to deep art lovers on a daily basis, everyday during lunch break and after school we gathered with the best local rare talents and create different harmonies with our voices. During the High School days it was a privilege to have meet "LefaOfentse" who introduced me to both clap n tap Gospel Choirs and Instrumental music. Later on the year of 2012 Mafatshe bought his first guitar instrument.
Through the love of art he was able to create different community based art projects to serve his community.
1. #KasieLiveSessions is a musical event which exposes young people to engage more in arts than drugs.
2. #FeedAChildsDream is a non profit project Mafatshe uses to embrace and encourage the young leaders for the better of our nation.