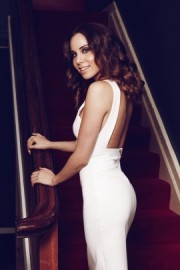 Caterina Torres has been called an Aussie ‘It’ girl and a role model, a star-in-the-making and a girl-next-door. She’s been invited to work with producers and beat-makers from London to Los Angeles. Her soulful voice and natural style have seen her take the stage on network television phenomenon The Voice and tour Australia and South America with one of her most ardent champions, Ricky Martin.
Caterina has been fortunate enough to travel the world to hone her song writing. For a year and a half following graduation, hopping between the USA and the UK, working with Toby Gad (Beyoncé ... , Alicia Keys), Cathy Dennis (Katy Perry), Lester Mendez (Nelly Furtado) and The Presets’ frontman
Julian Hamilton, to name a few. Songs Caterina wrote in that time have been recorded by Puerto Rican singer Ednita Nazario (the album featuring the song reached number one on the Billboard Top Latin Albums Chart) and J-pop artist Kumi Koda. With some incredible co-writes and cuts underneath her belt Caterina returned to Australia with a first-class musical education and a new determination.

The 2013 cycle of The Voice Australia provided Caterina a platform on which to show the public what she could do. She became part of Team Ricky, and Ricky Martin became a fierce supporter of Caterina even after the cycle’s finale. Following a national tour with Martin, Caterina joined the international icon on a tour of Chile and Uruguay in early 2014.