I'm looking for:
near:
Or click here to view a list of all locations
You Are Here: Tribute Bands / Abba Tribute Bands / United Kingdom / North of England / Cheshire / Chester / UK Bjorn 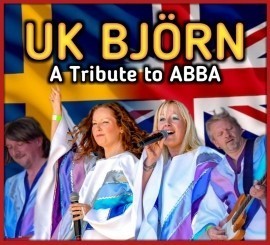 (7 Reviews)5.0
Country: United Kingdom
Based In: Chester, North of England
Performs: Nationwide
From: £750

UK Bjorn top the pile of Abba Tributes, bringing you Authentic Sound, perfectly replicated costumes & high-energy dance routines. They are based in Staffordshire and are available Nationwide.
Contact Me / Request a Quote View Website

1 x 60 minute set of Abba… This is a party set containing the best loved and most upbeat Abba hits to keep your audience on the dance floor from start to finish.
1 x 75 minute set of Abba… The same idea as the 60 minute set, but incorporating a couple of extra hits whilst sill keeping the dance floor going.
2 x 45 minute sets of Abba… For a more laid back start to the evening, the two set show contains mainly the much loved slower and mid tempo hits in the fist set and then gets the party started in the second set with all the dance floor fillers. An interval of around 15 ... to a maximum of 45 minute’s is recommended between the two sets.
Duo… 2 x female vocalists playing the parts of Agnetha & Frida, plus sound engineer. Lead vocals are of course live and all backing music is on track.
Band… 2 x female vocalists playing the parts of Agnetha & Frida, plus 2 x male musicians (guitarist & keyboard player), playing the parts of Bjorn & Benny and bringing live instrumentation and backing vocals to the show. The overall sound still includes some music, such as drums etc. on track.
5 Piece Band… As above but with Bjorn UK's sensational Drummer, keeping time and twizzling sticks…

There has been and will only ever be one ABBA! Here in UK Björn we celebrate the timeless music, without pretending to be the Swedish sensations themselves. No bad hair, no phoney accents, just the desire to pay homage to ABBA whilst providing an affordable tribute, without any compromise on quality. With the classic sound and look being carefully replicated and by adding a huge handful of on stage pizzazz, you’ll be transported right back to the good old days where it all began and taken on a journey through the many years of global domination.
With not a prima-dona in sight and the onl ... y band rider being that everyone has a great time, UK Björn never fails to put on a show that keeps people coming back for more time and time again.
Make your event the best it can be by booking UK Björn now! 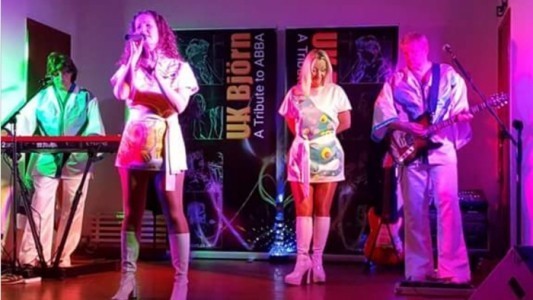 Steve- Being brought up around music owing to his father being a musician, it seems Steve's natural progression was to teach himself how to play the guitar. A passion for blues and country music helped him to develop a natural feel, which many musicians today are sadly lacking. After working behind the scenes as a session guitarist in London studios, Steve took to the stage playing lead guitar in several blues/ rock bands and a tribute to one of his childhood friends, Robbie Williams. Steve moved into the wonderful world of Abba after meeting his now wife Kerri, an already established Abba per ... former. The couple went onto form UK Bjorn and have been recognised to be one of the best Abba tributes in the business ever since.
Kerri - Following in the footsteps of many of the greats, Kerri started out her career on the stage as a coat style entertainer with Haven Leisure. After finding a talent for singing she decided to take things a step further and applied to train at the highly acclaimed Academy of Contemporary music in Guildford. Completing the year long diploma with flying colours, she went on to front various bands working for company's such as Warner Leisure Hotels and P & O. Finally in 2001 her career took her down the path of becoming a Tribute Artist and she has since portrayed both Agnetha and Frida in some of the most established Abba bands in the industry, until most recently setting up UK Bjorn with her husband Steve.
Rick - Trained classically on the piano and violin, Rick’s musical career has spanned over 25 years. As a performer, bandleader and musical director, he has appeared all over the world supporting some amazing artists including; The Eagles, Status Quo and John Mayer. As a keyboard player Rick is currently endorsed by Roland and along with his continuing international performances is involved in the development of educational programmes with Roland UK. As if that wasn't enough, Rick is also the head of music and performing arts at Walsall College. Rick has been performing in Abba tribute acts for over 15 years and has spent some 10 of these working with the internationally acclaimed Bjorn Again.
Sharon - Having studied performing arts at Elmhurst School of Dance in Birmingham, Sharon has gone on to carve a successful career in the music and entertainment industry which has already seen her through over 20 years. After working as a solo artist and band vocalist, Sharon progressed to the international circuit and has worked all around the world for companies such as The Hilton Hotel group, Cunard, Windstar and P & O Cruises in various Tribute acts. More recently Sharon has toured Europe with a number of theatre productions and like her husband Rick, has appeared in the world famous Bjorn Again.

UK Bjorn comes to you fully self-contained, with a top Quality HK Audio PA rig upto 8Kw, which basically means we have a fantastic, modern PA system that can comfortably cope with a room filled with around 900 people.
Not wishing to leave ourselves in the dark, we also have great stage lighting including multiple led lighting cans, coloured pin spots all DMX controlled, to ensure audio and visual excellence.
If your event does not include a DJ, 70’s and 80’s music can be provided and played through our PA system in between the Abba sets if you are going for the two set show. (See per ... formance schedule)
For added peace of mind, Bjorn UK have public liability insurance and all electrical equipment is PAT tested.
Make your event the best it can be by booking Bjorn UK now!