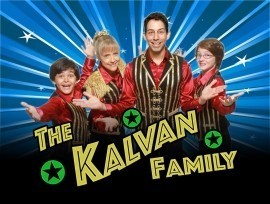 (no reviews)5.0
Country: United States
Based In: Los Angeles, California
Performs: Nationwide
From: $900

Jack & Jeri Kalvan are Hollywood's favorite jugglers! • Theatrical or corporate • Always a clean, fun show that all ages enjoy. • Up to 90 minutes of nonstop variety. • Audience members become the star of the show. • Easy to work with and flexible.
Request a Quote
Share this Page:
Profile Views: 1524
Report this profile

L.A. Jugglers Jack and Jeri and their circus family are the perfect entertainment for your family event. They’ll perform amazing and outrageous circus skills, and they even get audience members involved. Their clean comedy gets everyone laughing together.
The fun energy they bring to the stage is exactly what most events need. You’ll laugh! You’ll be amazed! You’ll want to take them home!

Winners of the final episode of ABC’s The Gong Show! Jack Kalvan is part mad scientist, part world-class juggler. Jeri Kalvan is a former teacher turned Hollywood stuntwoman. Together, their one-of a kind performance will have your audience on the edge of their seats, and rolling on the floor laughing at the same time ...if that's possible.
Whether it’s theatrical or corporate entertainment, Jack and Jeri Kalvan have you covered, with many years of experience in all venues.
Starting with traditional circus arts like juggling, acrobatics and unicycling, they have added in more unconventio ... nal ideas, fascinating audiences with flowerpots, slinkys, art supplies, tennis ball guns, video projectors, giant whoopee cushions, and much more.
But perhaps their greatest juggling act of all, is how they raise their family. Jack and Jeri are "passing the torch" to their two sons, Max and Oz, whose skills are progressing at an alarming rate! The Kalvan Family has appeared on America’s Got Talent and Disney’s K.C. Undercover, and has received rave reviews from fairs, festivals, theaters and corporate events. 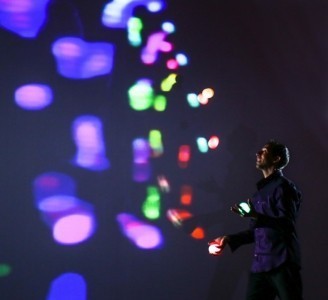 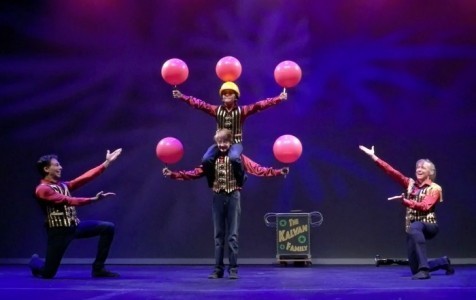 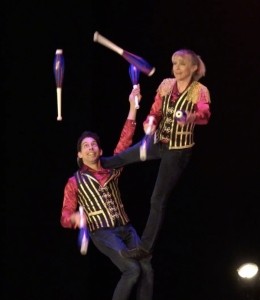 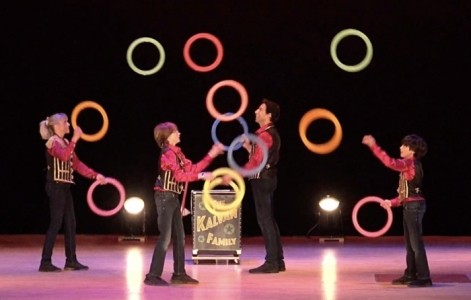 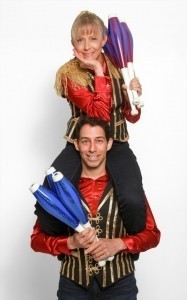 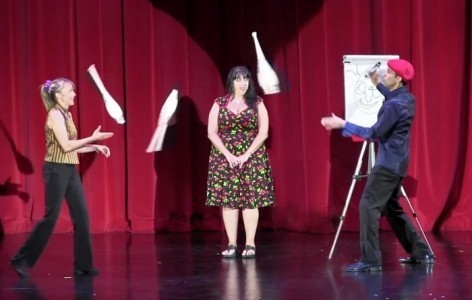 Testimonials:
“You guys took the juggling to a new level. Not only did you have fun with it, but you involved the crowd and it was a blast. It's really hard to find clean, funny, enjoyable entertainment now, so thank you.” - Salvation Army Training Center
“As usual, you had the audience screaming with laughter, and mesmerized by your tricks. Thanks so much for always doing a “squeaky-clean” show. I wish we could count on everyone to do the same thing.” - Periwinkle Productions
“A study in fine entertainment -- engaging premises, challenging juggling made to seem effortless ... , and great lines delivered with perfect timing, all filtered through a persona unwilling to take life seriously.” - Juggle Magazine
“You were great. You were one of the best acts that we have ever seen. I want you to come back, and come back soon!”
- Gracie Gallegos, Mayor of Pico Rivera, CA
“I loved the freshness, originality, and above all the humor of your performance.”
- Roger Ordish, BBC Television
“Wow! This was everything I had hoped for. We had a marvelous evening. Jack and Jeri Kalvan, a married team of jugglers, were very entertaining and funny. I got a kick out of their tamed, performing Slinkies! We definitely got our money’s worth in this memorable evening.” - Review excerpt from Alex Theater - Glendale, CA
“The audiences loved the uniqueness of your act, and your professionalism. The interaction between the two of you on stage was delightful. You were visual, high energy and fun. …truly magical.”
- Jack Goldfinger, Academy of Magical Arts
“It was joyful. I would have loved to be on stage with you guys. I would have loved to be a part of your family.”
- Thomas Lenglart, Casting manager, Cirque Éloize
“I’m usually not like this. …That was a 10! C’mon, that was great.”
- Ken Jeong, ABC’s The Gong Show