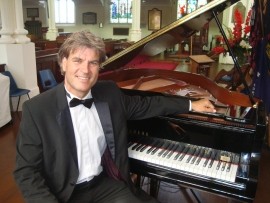 When contacting this member, please state that you are viewing their Entertainers Worldwide profile.
Request a Quote
Share this Page:
Profile Views: 733
Report this profile

I love playing the American songbook, musical theatre, light classical, and classic pop. I have almost thirty years experience playing in restaurants, lounges and bars for weddings, cruise ships, parties, corporate events and all sorts of other special occasions.

As well as playing the piano I have written the music and lyrics to five original musicals: Great Expectations (2002), Treasure Island! (2003), The Wind in the Willows (2008), The Railway Children (2011) and Arbuckle (2016). The last three being in collaboration with writer/actor, Ben Sleep; our most notable successes being the The Wind in the Willows tours in 2009 & 2010 (UK) and 2015 (Far East) and the hugely popular Railway Children UK tours 2016/17. Two songs from Treasure Island will be used in the forthcoming feature film, Little Darlings (ManMade Productions). I have also ‘collaborate ... d’ with a certain Roald Dahl on some songs for James and the Giant Peach, produced over Easter 2014 at the Gordon Craig Theatre, Stevenage.
My most recent musical work is a musical based on the 1921 scandal surrounding Roscoe ‘Fatty’ Arbuckle. It focuses on the crucial drama in his life, where he quickly turned from being a nation’s treasured funny man into a toxic figure of ridicule and despair. Sex, jealousy, greed, fame, infamy, betrayal, public anger, press manipulation, they’re all in there! The latter two being a particular lightning rod to today’s public affairs.
In between my writing, I have spent time as a pianist on a world cruise where I produced arrangements for the on-board cabaret. I am a songwriter, theatre composer and music tutor as well as having been a secondary school music teacher for nearly ten years, during which time I regularly taught singing and directed the music for many shows, including Guys and Dolls, Little Shop of Horrors and Cabaret.
I have composed and arranged music for several companies, most significantly for the outdoor touring productions of ‘Mad Dogs and Englishmen’ (The Medal, Much Ado About Nothing, Hamlet, As You Like It and Henry V). Also, I have been the musical director on a number of shows including Third Theatre’s acclaimed production of Bizet’s Carmen.
Before all this I spent six years as an graduate engineer for Rolls Royce Aeroengines. 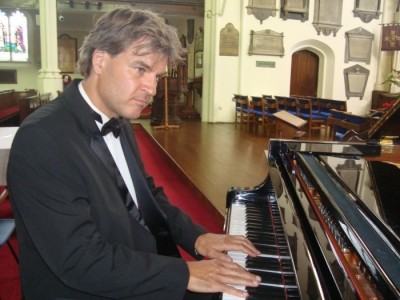 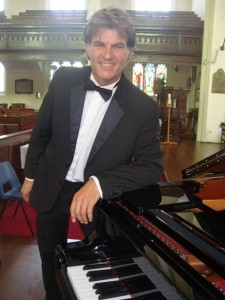 Stephen Kingsbury - Pianist / Keyboardist - UK, South East Event Location: The White Hart, Hingham, Norfolk Event Type: 85th Birthday 22nd April 2017
We were both impressed and very appreciative of the effort that you went to in order to ensure that the 'singalong' at my mother's birthday party was a success. You had been so helpful prior to the event that it came as no surprise to us that you 'went the extra mile' for us on the evening. Your piano playing and singing were a joy to listen to. We hope to have an occasion when we can use your services again. With thanks again and very best wishes, Tony (and Rita of course). (10 / 10)
Reviewed by: Tony Abel
Stephen Kingsbury - Pianist / Keyboardist - UK, South East Event Location: Assembly House, Norwich Event Type: 50th Birthday Party 7th October 2016
Stephen was Amazing. I am not sure who enjoyed it more myself and my guests or Stephen as he had a Steinway Grand Piano to play. He played great mix of songs and was very happy to accommodate my song choices. Several of my friends found themselves singing along, from the young to the old. (10 / 10)
Reviewed by: Carol
Stephen Kingsbury - Pianist / Keyboardist - UK, South East Event Location: The Waterside Hotel, Rollesbury, Norfolk Event Type: 60th Birthday Party 18th June 2016
He was perfect, personable and won the praise of many of my guests. Stephen was flexible to the needs of the evening and was committed to ensuring the music complemented the event. We would absolutely recommend him! (10 / 10)
Reviewed by: Trish Bell
Stephen Kingsbury - Pianist / Keyboardist - UK, South East Event Location: Priory Hall, Hadleigh, Suffolk Event Type: Wedding 28th May 2016
Stephen played during our ceremony and drinks reception/meal for our wedding on Saturday 28th May. I could not recommend him more! He was very professional and helpful in the run up to the day, accommodating all of our song requests and additional extras. He was also brilliant at including a last minute request for our ceremony. If we were to do it all again, we would book Stephen for longer. Thank you ! (10 / 10)
Reviewed by: Mr and Mrs Ward
Stephen Kingsbury - Pianist / Keyboardist - UK, South East Event Location: Glemham Hall, Suffolk Event Type: Wedding 21st May 2016
Stephen played at our wedding on the 21st May 2016 and we couldn't have asked for anyone better. He was very professional in the run-up to and on the day itself, we felt very at ease and reassured. Stephen played beautifully during our ceremony and our drinks reception afterwards. We had a few specific requests for our ceremony and Stephen was absolutely at ease with these requests. He was very easy to get on with. Our guests were commenting on such a lovely addition to our wedding having a live pianist there, and Stephen really helped to set the tone of the day. Thank you so much! We would definitely recommend you to our friends. (10 / 10)
Reviewed by: Alex
Stephen Kingsbury - Pianist / Keyboardist - UK, South East Event Location: Marks Tey Hotel, Essex Event Type: Wedding 30th December 2015
Stephen played for us at my Daughter's Wedding on 30th December 2015. I can not thank him enough for helping make the day so magical, playing for the arrival reception, the Bridal March in and out to entertaining all the guests whilst the photos were taking place. Stephen was very professional throughout and made sure even the little ones were entertained with all the Disney songs. Would highly recommend him to all for any occasion. (10 / 10)
Reviewed by: Susan Stewart
Stephen Kingsbury - Pianist / Keyboardist - UK, South East Event Location: The Officers's Club, Colchester Barracks, Essex Event Type: funeral 5th March 2015
Stephen played the piano for us at my fathers wake recently. My Father used to play the London pubs when he was younger so we wanted someone to play as a tribute for him. We certainly chose the right person and we would like to thank you Stephen for a brilliant tribute, my father would have loved it. I will recommend you to all my friends and anyone that needs a pianist, (10 / 10)
Reviewed by: Kevin Brown

I have almost thirty years experience playing in restaurants, lounges and bars for weddings, parties, corporate events and all sorts of other special occasions. In addition, I have also spent considerable time playing on cruise ships around the globe. My repertoire includes light jazz, well-known classical pieces, musical theatre and classic modern pop hits. I will happily tailor these styles to suit your occasion, your tastes and requests. I prefer to play a well-tuned real piano if possible but I do have a great sounding digital piano if necessary.