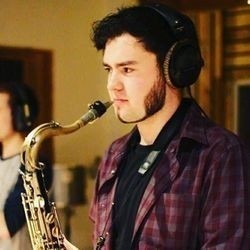 Alex Lloyd is a professional saxophonist and arranger who has a strong sense of soul in his playing. He has worked extensively in many different musical fields and in many different styles.
Request a Quote
Share this Page:
Report this profile

Alex Lloyd is a 22 year old saxophonist and arranger.
From an early age, Alex took an interest in music after hearing his parents play the music of Motown, Philly Soul and classic Pop and Rock music. When he was 9 or 10 years old he heard legendary Motown saxophonist Junior Walker and that started his passion for the saxophone. At the age of 11 he began to take saxophone lessons and has been playing ever since. At the age of 15, after performing with various school bands, Alex was asked to play in the house band of a blues bar in a local town in Devon. This led to other jobs in the local ar ... ea with an array of blues, rock and roll and soul bands and by the age of 18, Alex was touring across the UK with bands.
Alex spent time in recording studios working on sessions for a host of artists including work for Detroit Soul Producer and Four Tops drummer Drew Schultz, US Soul Singer Delbert Nelson as well as working with members of the iconic Motown studio band the Funk Brothers including 'chank' guitarist Eddie Willis - a real thrill for a soul fan!
At the age of 18 Alex was fortunate enough to work with some of the top names in British jazz. He has played, recorded and travelled with the Mike Westbrook Orchestra as well as playing alongside musicians such as tenor saxophonist Lou Gare (AMM) David Holdsworth (John Surman/Mike Osbourne), Gary Bayley (Curtis Mayfield/John Williams). Doing this was a huge learning curve for Alex and remains so. Alex has since released 1 album ('What in the World' 2017) and 1 EP with his orchestra ('Beyond Horizons' 2018). Details of these can be found below.
Arranging/Composition:
Experienced across a wide range of musical styles, Alex's passion for arranging and orchestrating music initially came from listening to soul music and in particular the sounds of Motown and Philadelphia, with their use of lush and exciting musical arrangements whether it be string sections or horn sections. Arrangers such as Paul Riser, Thom Bell, McKinley Jackson, Gene Page and Bobby Martin all helped to establish a passion in music. Jazz arrangers such as Duke Ellington, Gil Evans and Henry Mancini also played a huge influence in Alex's passion for arrangement and composition.
Studying music with an array of different arrangers in the music world has allowed for Alex to understand a variety of different techniques and styles. These experiences include shadowing and studying with legendary Motown/Soul music arranger McKinley Jackson when he was working as MD for the Temptations on tour in England as well as studying and shadowing a host of London based film and theatre arrangers. In 2018, Alex also shadowed top arranger and O'Jays musical director, Dennis Williams when performing in London with the O'Jays.
Alex is also a music teacher with a First Class BA Music Degree with Honours from the University of Plymouth, Trinity College of London Grade 8 Distinction jazz saxophone and full CRB/DBS check. He has been teaching both as a private tutor and in schools for 5 years.