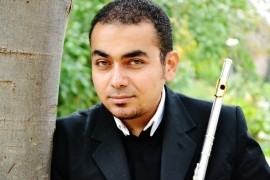 (no reviews)5.0
Country: France
Based In: France - Marseille, France
Performs: Worldwide
From: it depends !

Winner of the Nice Flute Competition France 2010 International Flute Convention
Egyptian Flutist Mina Ghobrial started playing the flute at age 12 when he joined the Cairo Conservatory. He was awarded 1st prize as Soloist by the Egyptian Supreme Cultural Council, and was awarded his Bachelor of Music from the superior Conservatory of Cairo, grade Excellent.
After moving to France, he studied in Marseille, the “Capital of Flute”, with "Paganini of Piccolo”, Jean-Louis Beaumadier, then in Paris with international flute player and conductor “Patrick Gallois”. He was awarded 7 gold ... medals by an anonymous jury in the Conservatories of Marseille and of Aulnay-Sous-Bois “Paris” in Flute, Piccolo, and Chamber music.
Mina has played with many orchestras and great conductors around the world, including Daniel Barenboim in Divan's Orchestra, which performed at Albert Hall and Barbican Hall in England, at the Berlin Philharmonic Hall, at the inauguration of the Olympic Stadium in Berlin 2004, at Victoria Hall in Switzerland, and at the Madrid Opera.
Mina has performed as guest principal flute and piccolo soloist in many orchestras, including the Mediterranean Sea Orchestra (OJM) for four seasons “France”, and the Arab Youth Philharmonic Orchestra Tour in Algeria.
He has played as soloist with the Alexandria Chamber Orchestra (BAO), the Cairo Conservatoire Symphony Orchestra, the Symphony Orchestra of CNRR de Marseille, and the Orchestra OJM. He has also played in recitals around the world, in France, Germany, Spain, England, Switzerland, Algeria, Egypt, and Kosovo.
Mina was the First Principal Flutist at the Ensemble of Contemporary Music in Alexandria, the only contemporary music ensemble in the Middle East.
Several works, including: "Flusion" by Samy Ramz Sabry , "The Drunk" by Bassam Halaka, "Sad Man" by Ibrahim Shamel, were all written especially for Mina. Mina has worked closely with world-renowned artists in festivals and master classes, including Sir James Galway, William Bennett, Maxence Larrieu , Philippe Bernold, Andras Adorjan , Patrick Gallois, Jean-Louis Beaumadier, Raphael Leone , and Ransom Wilson.
Mina created a Group of Chamber Music in 2011 with the guitarist Romain Lunge. They recorded a DVD and played in many festivals and recitals around France, including at the Opera of Marseille.
Mina has recorded three DVDs. The first, “Calme Révolutionnaire”, included many world premiere Pieces, such as the Sonatine for Flute solo by Henri Tomasi. The second was Vivaldi Concerto in A Minor for Piccolo and Orchestra, conducted by “Philip Bride”,
3rd was with Divan’s Orchestra “Tchaikovsky Symphony No.5” Conductor “Danial Barenboim”
Mina is now preparing to record a flute and Piccolo CD with international piccolo player Jean-Louis Beaumadier. 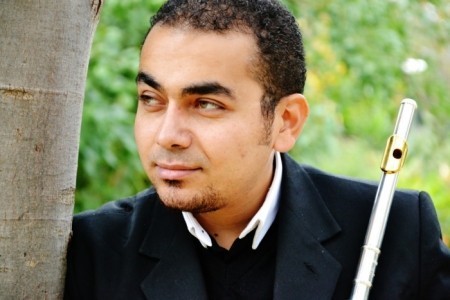 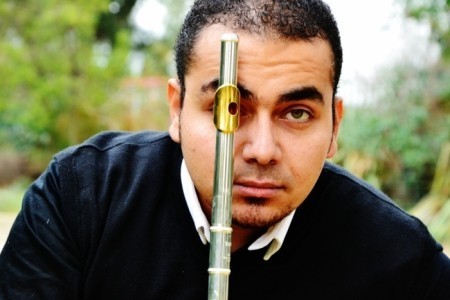