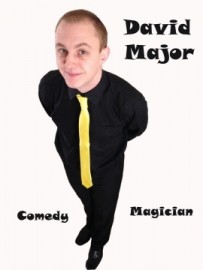 David is a comedy magician that is able anything from a 12 minute spot to a full hour Comedy Magic show. His main show is a 45 minute one person comedy magic show suitable for all ages, involving the audience and some amazing magic effects.
As well as the above David is a busy close -up magician.

David has been practising magic from the age of 5, and has been professional since 2006.
Since 2006 David has been working with False Impressions in London, as one of their resident Magicians in their weekly magic shows.
In 2010 David and his Fiancée Laura put together Mysteria, an small illusion show, who were immediately booked for a themed show in London called The Ice Cave.

Insured for Public Liability and CRB checked,
All PA and any electricals used are PAT tested.