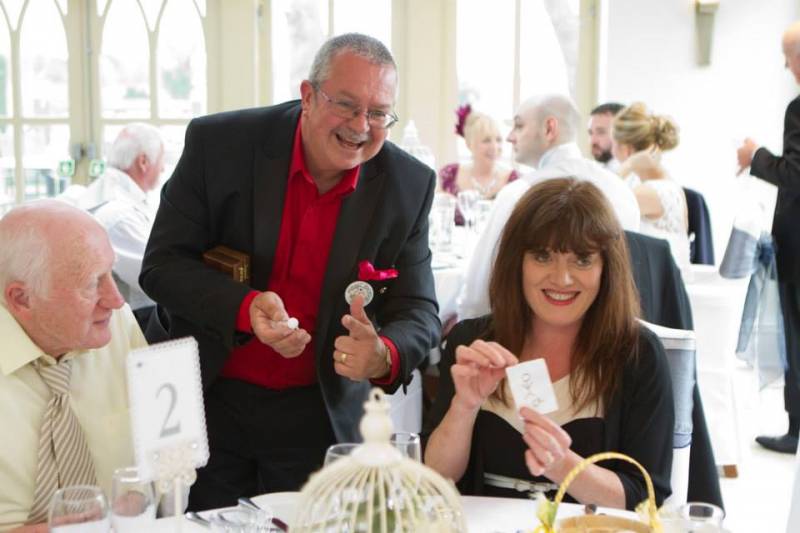 Read the interview to learn more about what Magic Bob has to offer and watch his video performance. Make contact to hire his act as a Magician for your upcoming wedding, corporate event, birthday party, anniversary, dinner or other event!

How long have you performed as a Close-up Magician and what made you get into it?

My Name is Magic Bob and have performed close up magic since I was 18 years old, after watching a magician called David Nixon and later Paul Daniels I got hooked on magic and started to perform to family and friends and later went to magicians  convention  in Blackpool and  later became a member of the British Magical Society. Well the rest is history and started to perform at Wedding, Christenings and special party/dinner functions and award ceremonies in Birmingham and the West Midlands.

What exactly does a Close-up Magician do at events?

I stroll around from table to table  performing mind blowing close up magic to the guests at various functions. The whole experience is both fun and memorable, giving an extra special touch to any special day. I sometimes do magic at the bar or while photos are being taken at a wedding. It is sometimes called mix and mingle magic.

Has anything funny or embarrassing ever happened whilst performing magic close up?!

The most funniest thing that ever happened to me, was I was to perform in a lovely house, but had decorators in that morning. I went to the bathroom to wash my hands just before I had to start. I went to open the door and the handle came off in my hand and was stuck in there for five minutes, I opened the bathroom window and could see people below. I shouted down I am stuck in the bathroom can some one open the door for me. They shouted back “And you’re the magician??!”. (YES THEY DID LET ME OUT)

What type of events do you usually perform at?

I normally perform in hotels for weddings, and special dinners, christenings, but these can be held in church halls or hired rooms in the Midlands. I have worked for various university Balls and functions where I have performed close up at the tables and golf clubs where magic was needed to entertain families at Christmas time. Certain times of the year I work in restaurants as a close up magician and the Birmingham NEC Exhibition Centre for product launches or trade shows where a special bespoke service is specifically designed for  that show. The last close up gig I did was last week at Studley castle for MS Charity Ball.

What cities do you mostly perform in?

I mainly perform in the Birmingham and the whole of the West Midlands Area, but can travel if required

Where has Close-up Magic taken you in your career?

I am a professional close up magician that takes me all over the Midlands and afar.

Is there a certain gig / function / event that you aspire to perform at?

I would love to be able to perform to a function dinner of the rich and famous if only once.

What is the most amazing routine that we should expect to see when seeing your Close-up Magic act?!

I normally give out a box which is padlocked when I arrive at a table, made out of rosewood. During many effects like there rings appearing in my back pocket which is inside a wallet, coins bending in there hands, the first chosen signed card from the beginning of the act is then found in the box which is at the other end of the table or in someone’s bag.

If you are looking for an amazing Close-up Mix & Mingle Magician for your upcoming party, wedding, luxury hotel, dinner dance or corporate function, contact Magic Bob now through his Entertainers Worldwide profiles for bookings here:

Not a member with us? Click below to increase your exposure now!

This entry was posted in UK Close-up Magicians, Interviewing our Entertainers!. Bookmark the permalink.