40 Years On And The King Has Never ‘Left The Building’.

AS FANS prepare to mourn the fortieth anniversary of Elvis Presley’s death, there are some people for whom the King has never ‘left the building’. 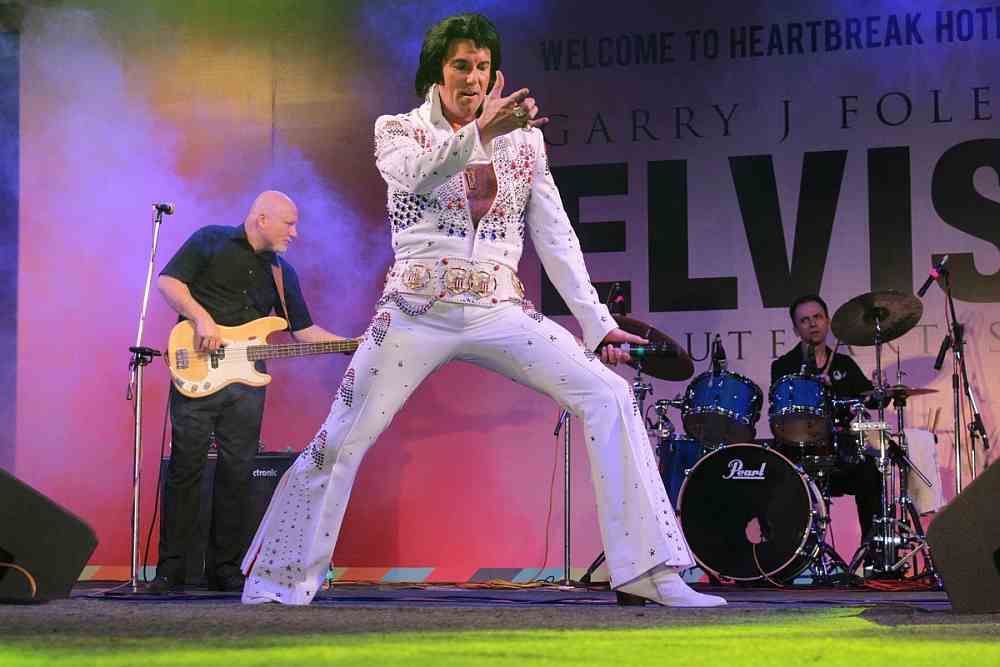 By the time of Elvis Presley’s death in 1977 he already had an estimated 170 tribute acts. By 2011, according to one calculation, this number had grown to over 85,000. Taking this  increase to its logical conclusion at that rate, it could be predicted that by 2040, Elvis Impersonators will make up a third of the world population!

The first Elvis impersonator is acknowledged to be Jim Smith, a 16-year-old Canadian who mimed Elvis songs on the television show House Party in 1956.

Even ten years ago, Robert Sillerman, then owner of Elvis Presley Enterprises, claimed that more than 84,000 people listed their main occupation as ‘Elvis impersonator’ on their tax returns.

We thought that we would mark the 40th Anniversary since the King’s untimely departure by featuring some of our top Elvis Tribute Acts currently performing and available to book from around the world.

Garry has been an avid Elvis fan since a young age. He used to ‘borrow’ his Dads records and constantly play them. The first record Garry bought, was the re-release of ‘Don’t Be Cruel/Hound Dog’ and he was hooked on Elvis’ music.

Garry spent quite a few years in Musical Theatre then had the opportunity to enter into the Tribute world and fulfilled a life long ambition to entertain people by performing Elvis’ music and has since travelled the world doing so.

His costumes are exact re-creations of Elvis’ on and off stage wear and are all made by a renowned US costume maker, who holds the original patterns of Elvis’ jumpsuits.

Dean Vegas is The Aussie Elvis

Dean travels the world wowing audiences with his ‘Tribute to Elvis’ spectacular. Throughout this energised Vegas style show, audiences not only share the hits from Elvis’ amazing career, but experience the passion and warming personality of a truly great performer.

Dean competed and won the world’s largest Elvis Festival in Collingwood, Canada in 2000 and continues to break house attendance records night after night as his popularity grows at an astounding rate.

Find out more about on http://www.deanvegas.com

Jim and the Rebels have won the hearts and respect of thousands of Elvis Presley fans world wide. Fans have been patiently waiting for something new, and have been asking for something different, in the world of music and Elvis Tribute Acts. Jim has answered that call and has been pouring his heart and soul out to his fans, at every show.

Taken from the website http://www.jimandersonandtherebels.com Jim says: “I feel extremely blessed to have such wonderful fans and audiences at every show. I truly enjoy performing and I am very humbled that so many folks come to the shows to see us. I have some of the best musicians in the world, who are truly dedicated, hardworking, and professional. I want each show to be personable to everyone and want that positive memory to last a lifetime for them. I am gonna keep singin’ to folks for as long as they’ll have me!”

If you are thinking about booking an Elvis tribute act for a party or event you can search all our Elvis Tributes available to hire and contact them directly to make a booking.

This entry was posted in Tribute Acts and tagged Elvis. Bookmark the permalink.