How to Make a Promo Video that Will Get You Bookings 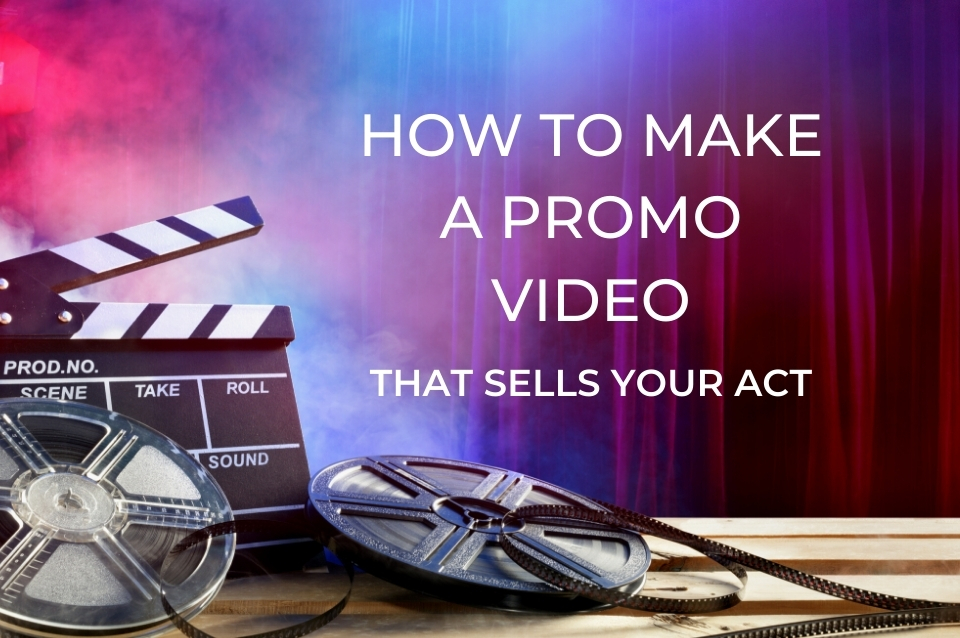 Did you know that we may never have heard of Adele or Justin Bieber if it wasn’t for their videos? Both were only discovered after people saw them performing online…

Video is king – and your video is the make or break when it comes to getting those bookings or landing that audition.

Our own booker feedback shows that bands and acts who have a professional looking videos get many more enquiries & bookings than those who don’t. It’s as simple as that.

They certainly can be, but there is another way. Read on for our simple how-to guide and if you don’t have video editing skills, then make sure you take a look at our members’ video editing service where you can get a professional video for just £45/$59/€50.

There may be hundreds of hours of video uploaded every minute on YouTube alone but research shows that 20% of people who start watching a video will leave after 10 seconds. The answer?…make enough of an impact within the first 10 seconds of your showreel to get people’s attention and then keep them watching AND make sure your important information, like your act name and what you do, is at the start.

To get their attention use the three Bs: Be creative. Be unexpected. Build anticipation (but don’t take too long). Use quick cuts and imaginative camera angles. Show a variety of footage, different gigs in different venues, switch from inside to outside, shift focus from the performers to the audience and intersperse the video with informative text about what you offer e.g. ‘Available for Weddings, Parties & Corporate Events’, plus your all-important written or filmed testimonials from happy customers.

To create a truly professional video,  you want a showreel with high-quality audio and visuals. Badly filmed, poor-quality footage can do more harm than good.

Footage of you performing live at an event to groups of people is highly recommended to show potential bookers real proof of the energy that you could bring to their event and the reactions of the audience.

Make sure you connect with the viewer on a personal level. People want to feel that they will find you easy to deal with and that guests will enjoy having you at their event.

Incorporating interview snippets is also a great way to introduce yourselves in a more personal way. Talk about what artist influenced you the most, your first magic trick, favourite DJ (relevant to your act type)…everyone loves to feel like they’re getting the inside story. If you’re a band, describe the different band members. Who’s the funny one? Who’s the bossy one? How did you meet? Does anyone have any unusual hobbies or talents?

When bookers are searching through tons of videos, these are the things that will stick in their minds.

A promo video doesn’t need to be completely confined to footage from gigs. Sneak peaks of you rehearsing or hanging out backstage add interest and variety.

The main thing is to look like you’re enjoying yourself. Smile, laugh, dance and connect with the audience and each other.

A fantastic example of this can be seen with Counterflow‘s video showreel, a high-energy Function & Party Band.

Think about your audience. What age group are you trying to appeal to? What type of events and venues are you hoping to perform at? Will your audience respond more to a fast-paced, energetic video, or something mellow and atmospheric? Which tracks will they want to hear? How will they want you to dress?

If you can, get plenty of great live footage. People want to see the audience dancing, singing along and generally having a fantastic time. You also want to include how versatile you are.  Display a variety of routines / numbers that you do.  If you are singer, a band or a musician, show your range, include upbeat numbers and slower tunes, electric and acoustic numbers and different line-ups if you have them.

Written reviews, FAQs and clips of audience members saying how much they enjoyed the show can be superimposed over video footage and provide useful information and extra reassurance to bookers.

What is your unique selling point? Do you sing and play the violin? Do you put a vintage twist on modern songs? Are you members of the same family? Let viewers know what’s special about you. If you’re an awesome saxophone player, bust out a solo. If you can dance, let’s see you dance –  make sure you showcase your talent.

Magician Ian Souch ‘s showreel is another fantastic example of what should be included in your video.

When it comes to promo videos, less is ALWAYS more. Be concise, stick to the point and resist the temptation to include long sequences, even if it’s your best ever performance. Pick out the most powerful bit and just use that.

Keep text inserts such as reviews and FAQs short and don’t use too many as this will distract viewers from the main event which is you performing.

Your video should ideally be no more than 3-5 minutes long. Even then, you want to break it up. Use different clips and vary the lighting and the setting.

Remember, you’re only giving a preview of your talents to get the booker’s interest. You don’t need to give away your entire show. Leave them wanting more!

Finally, before shooting a live video, don’t forget to ask the booker and the venue for permission to film. Let the booker know what the filming is for and reassure them that it won’t interfere with the show.

We hope you’ve found all our video advice really useful and it has inspired you to get planning & get filming – and don’t forget that we have an exclusive, low-cost video editing service for our entertainers (we can even create a showreel if you have no footage), so that every one of you can get those bookings.

This entry was posted in Create the Perfect Profile, Site updates & news for our Members, Entertainers Advice and Help. Bookmark the permalink.